Request Info
Virtual Visits
COVID-19
I Am a...
Search

Office of the Chancellor

Dr. Sandra J. Jordan became the fourth Chancellor of the University of South Carolina Aiken on July 1, 2012. As Chancellor, she serves as the chief executive officer and principal spokesperson for the University. Over the past 30 years, Dr. Jordan has served in a number of cabinet-level positions at universities, including Academic Vice President and Provost before becoming Chancellor. USC Aiken is a high-performing regional Comprehensive University offering baccalaureate and masters’ degree programs.

Dr. Jordan received her Doctorate (Ph.D.) and Master of Arts degrees in the History of Art from the University of Georgia. Dr. Jordan attended the Management Development Program at Harvard University’s Institute for Higher Education; the 21st Century Leadership Institute sponsored by ALIA and AASCU, and was a summer fellow at Vanderbilt University’s Institute for Higher Education Management. In 2016, Dr. Jordan became a Riley Diversity Leadership Fellow.

Dr. Jordan has a strong commitment to the community and has served on the board for the Aiken Chamber of Commerce, the Savannah River Site Community Reuse Organization (SRSCRO), the United Way of Aiken County, the Strom Thurmond Foundation, and the Aiken Corporation. Additionally, she served as President and Secretary of the Southeastern University Conference; serves on the Executive Board of the Southern Association of Colleges/Commission on Colleges; the South Carolina Women in Higher Education board of directors, the board of directors for the Council of Public Liberal Arts Colleges, and the Peach Belt Conference president’s board and executive team. Recently, Dr. Jordan was elected to the NCAA DII President’s Council, the Board of Directors for the American Association of Colleges and Universities (AASCU), and the NCAA Board of Governors. Dr. Jordan is also active in developing future higher education leaders and devotes time to mentoring cabinet level professionals through the national American Academic Leadership Institute in Washington, D.C.

Throughout her career, she has worked extensively to expand international educational partnerships by negotiating agreements and building alliances with universities in Europe, Asia and the Middle East. Additionally, she has worked in partnership with regional business and industry to align USC Aiken’s programs with their workforce needs. That work has resulted in new business, computer science, cyber security, and engineering degrees.

Dr. Jordan and her husband Michael reside in Aiken. They have one son, Matthew, who recently completed his doctorate in Electrical Engineering and is now employed as a senior researcher at Sandia National Labs in Albuquerque. 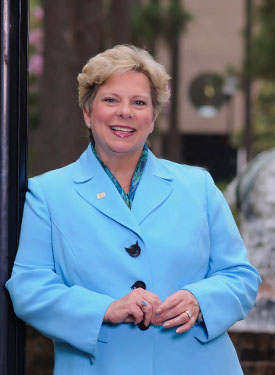 Directories Give to USC Aiken