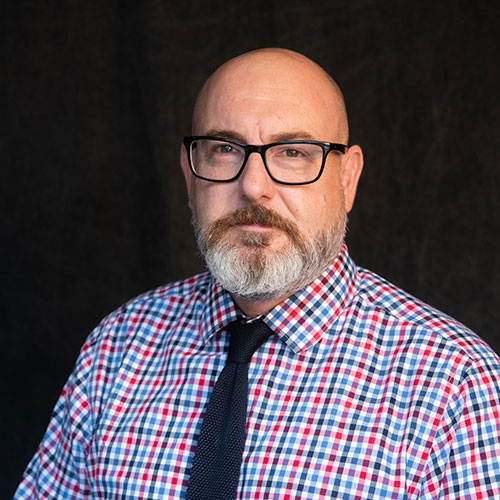 Jason Munsell, PhD
Department Chair of Communication
Associate Professor
Communication
H&SS 204 A1
803-641-3604
This email address is being protected from spambots. You need JavaScript enabled to view it.
https://www.usca.edu/jason-munsell-cv

Dr. Munsell was born ready to teach. Originally from Oklahoma, Dr. Munsell received his Kindergarten Degree in 1977. He went on to complete his high school diploma at Tahlequah High School, Oklahoma in 1989. Following in his father’s footsteps, Dr. Munsell pretty much always thought he’d end up being a professor, but he experimented a bit in college at the University of Arkansas; with a business major.

Business wasn’t for him. It didn’t seem to have a soul. So he found his way to a Communication and loved it; in part because of his introduction to folks like the Sophists and Aristotle, Cicero, Quintilian, and the like. Dr. Munsell wanted to be a good person speaking well (Quintilian), but also a good teacher speaking well. Dr. Munsell graduated with a BA in Communication from the University of Arkansas in 1993. When he was selected for the Masters in Communication program at Arkansas, the faculty threw him in as the lead instructor of two sections of Public Speaking (he was 22) and he adored it. After graduating with a MA in Communication in 1995, Dr. Munsell spent a year teaching at Rogers State University (then College) in Claremore, OK, as well as Tulsa Community College. He moved to Baton Rouge in 1996 and started work on his doctorate while teaching Public Speaking and Interpersonal Communication courses at Louisiana State University as a Teaching Assistant (though lead instructor) and then as a hired Instructor.

He wrote his dissertation on 19th Century educational policy rhetoric and graduated with his PhD in Speech Communication (emphasis in Rhetoric and Public Address) in 2000. Since then, he has taught in the University of Georgia System and spent fourteen years at Columbia College in South Carolina; where he was tenured and worked up the ranks to Full Professor. Wanting to return to a public institution (CC was private), Dr. Munsell joined UofSC Aiken in 2017 as an Associate Professor of Communication and was tenured in 2020.

A lot of the things Dr. Munsell does in his classes today come from his father. Both were way ahead of their time in regards to HIP (High Impact Practices). Dr. Munsell knows that hands-on activities work better than standard lecture, that using crayons in a college classroom is not only disarmingly fun, but effective in impacting student learning. Moreover, Dr. Munsell started incorporating new technology and social media into his courses before most folks even discovered such things existed. Dr. Munsell is a rhetorician, but also a performer (in both the vernacular and academic sense perhaps). He has passion for teaching that perhaps is in his blood. Dr. Munsell also has an authentic sense of duty to do his bit for others. He has been elected president of two academic organizations, Southern States Communication Association and the Carolinas Communication Association. Dr. Munsell was recently elected to serve in an officer capacity again for the Carolinas Communication Association. On campus Dr. Munsell advises our chapter of Lambda Pi Eta, the national communication honor society (he is also a member), as well as the new Alpha Lambda Delta chapter, the national first year success honor society.

New pedagogical technologies, including the art and craft of “sweding” films

Munsell, J. B. (2021). “Sherman’s March on Columbia, searching for green pipes, eating tacos and shooting Yankees: Tales from a self-guided tour and shelling reenactment.” In Leigh Anne Howard (Ed.) At Home and Away: Performance and Critical Autoethnography. Routledge. (Forthcoming)

Munsell, J.B. (2020). “Disruption in Charleston: The Sons of Confederate Veterans and the rhetoric of southern resentment,” Paper presented at the meeting of Southern States Communication Association, Frisco, TX. (Accepted but not presented due to COVID-19 pandemic conference cancelation)

Munsell, J.B. (2018). “A league of their own: Swed for the fences.” Short film presented at the meeting of National Communication Association, Salt Lake City, Utah.